Home >> SEO >> What is LPO? Basic points and examples of countermeasures!

What is LPO? Basic points and examples of countermeasures! 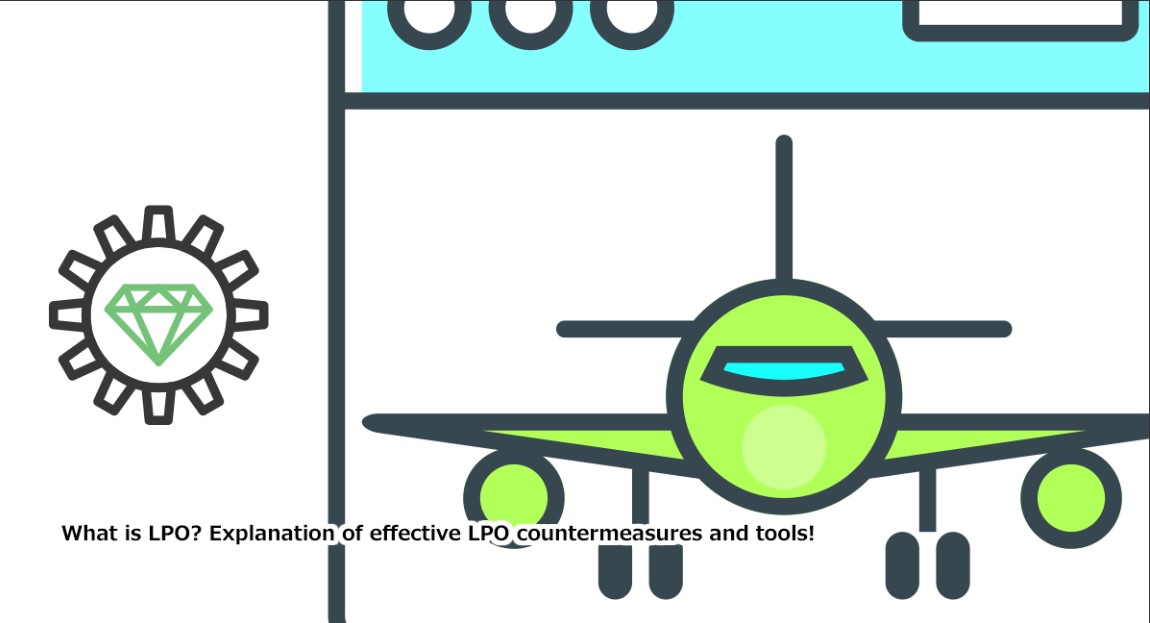 To avoid these bad situations , craft your landing pages and improve the quality of your LPOs.

By the way, you can’t expect good effect of SEO by LPO .

Based on this point, this time, I would like to explain the points that are easy for beginners to understand, focusing on the definition of LPO, LPO countermeasures, and LPO tools.

This run landing page has two patterns: informational and call to action.
In particular, the latter type of call-to-action is often called a landing page.
If you do a good LPO for this landing page, you can expect an increase in conversion rates.

For example, match the ad text with the first view text on the ad’s landing page.
In this case, a user who clicks on your ad will have no hesitation in landing on your landing page.
If so, you can smoothly read the contents without leaving.
As a result, it leads to perusal of the content, which makes it easier to convert.

Optimizing the landing page to increase the conversion rate in this way is LPO.

A feature of LPO is that conversion rate can be accelerated.
Also, since the page is not finished with SEO in mind, SEO effects cannot be expected.
Additionally, form optimization (EFO) is included as one of the LPOs.

LPOs are You can boost your conversion rate.

For example, put the words “how to improve ranking” on the first view of the ad and the destination (landing page) of the ad.
Then, we will set up effective content such as points to raise the ranking, examples of raising the ranking, countermeasures for raising the ranking, forms, and company profiles.
In addition, reduce the links that can transition to other pages.
That way, users who click on your ad and land can reduce bounces, abandonment, and stay longer.
As a result, users can peruse the content and increase user satisfaction, which leads to conversion promotion.

In this way, one of the features of LPO is that it can promote the conversion rate.

LPOs are No SEO effect.

For example, write the first view text of the landing page to match the text of the ad.
Then structure your content based on that wording.
In this case, the title tag becomes the wording of the first view, and the result is a page that does not consider search intent at all.
If that happens, there will be no demand from search users and the page will be difficult to be evaluated by Google.
As a result, search traffic is not expected.

In this way, one of the features of LPO is that SEO effects cannot be expected.

For example, let’s say that when you analyze your landing page with a heatmap, the form part is blue.
In this case, it is possible that the user has left the form.
In that case, optimize the form by reducing unnecessary or required fields, increasing the size of the input fields, etc. (Do EFO)
So you’re optimizing the form that’s part of your landing page.
The result is landing page optimization.

In this way, the fact that EFO is included is one of the features of LPO.

Difference between LPO, SEO and EFO

in this way, There is a big difference between LPO, SEO and EFO in terms of purpose and what they are optimizing for.

If you take LPO measures, it will lead to promotion of conversion rate.
In order to create such a favorable situation, we will introduce the points of effective LPO measures.

To match the content of the ad with the first view, Match the wording.
For example, let’s say you have an ad that says, “How to increase your conversion rate with LPO.”
In this case, the first view of the landing page (landing page) of the ad will also include the words “How to increase the conversion rate with LPO”.
That way, users won’t get lost when they click on your ad link and land on your landing page.
In other words, you can smoothly read through the content without bounces.
As a result, it leads to perusal of the content, which leads to promotion of conversion rate.

In this way, matching the content of the advertisement and the first view is the key to LPO measures.

In this way, reducing the number of links is the point of LPO countermeasures.

To create content with a story, Consider making your content consistent with the theme of your page.
For example, write the theme “How to display high with SEO measures” at the top of the page.
And I will briefly describe some of the methods.
Second, how did that method improve your search rankings? I will explain it so that you can understand it with a diagram using graphs and data.
Finally, how did you raise it? I will explain the specific countermeasures in points.
That way, you’ll have content that flows around the theme.
As a result, users can read without stress and read carefully, which leads to promotion of conversion rate.

In this way, creating content with a story is the key to LPO countermeasures.

To optimize your form, Consider eliminating the stress of typing.
For example, let’s say that there is an input item that is analyzed with a heat map and has a cool color.
In other words, there is a possibility that users are leaving the cold color part.
In this case, consider deleting the item, changing it arbitrarily if it is required, and simplifying the input assist.
This will reduce the user’s stress when entering items.
As a result, the number of users who apply or make inquiries will increase, leading to a higher conversion rate.

In this way, optimizing the form is the key to LPO countermeasures.

To put trust content,Set operational information.
For example, at the bottom of the landing page, include company information such as company name, date of establishment, capital and business partners.
In addition, we will also post the results and case studies of the services we provide.
That will make things clearer.
As a result, it leads to the user’s peace of mind, which leads to the promotion of the conversion rate.

In this way, placing reliable content is the key to LPO countermeasures.

To measure the effect of Take advantage of tools.
For example, suppose you prepare 3 landing pages with different configurations and verify which page has a good conversion rate.
In this case, leverage tools with A/B testing and multivariate testing (automatic optimization) capabilities.
That way, you can prioritize landing pages where users are most likely to convert.
As a result, only pages with good performance remain, which leads to promotion of conversion rate.

In this way, measuring the effect is the key to LPO measures.

By the way, tools such as heat map and LPO Ebis provided by AD Ebis can also analyze user behavior of landing pages and measure conversions.

Things to avoid in LPO measures

Even if LPO measures are taken, improper adjustment will have the opposite effect.
As a result, you will likely end up with lower conversion rates.
In order to avoid such a bad situation, we will introduce what you want to avoid in LPO measures.

Make the ad and the first view different

If the content of the advertisement and the first view are different, It leads to user bounces.
For example, the text of the ad is “I will teach you how to do LPO measures”, and the first view text of the landing page of the ad is “How much does it cost for SEO measures?”
In this case, a user who clicks on your ad to find out how to deal with LPO will not get the answer on the landing page.
This means that users who click on your ad link will leave as soon as they land on the landing page.
As a result, they don’t bounce back and peruse the content, which doesn’t help drive conversion rates.

In this way, making the content of the advertisement and the first view different is the point you want to avoid in LPO measures.

By increasing the number of links, It leads to user abandonment.
For example, establish outgoing links such as links that allow you to transition to other pages within the site or links that allow you to transition to external sites.
Users are then more likely to click on those links and exit the landing page.
As a result, the content is not read thoroughly, which does not lead to the promotion of conversion rate.

In this way, increasing the number of links is a point you want to avoid in your LPO countermeasures.

Too many form fields

If you add too many input fields to the form, It leads to user abandonment.
For example, create a form with a large number of input fields or mandatory fields.
In this case, the user’s input effort increases.
This increases the chances of getting stressed and abandoning the input prematurely.
As a result, they don’t leave the landing page and convert, which doesn’t help boost conversion rates.

In this way, increasing the number of input items on the form too much is a point that you want to avoid in LPO measures.

By the way, you can check if the user is leaving the input item by introducing a heat map.

Practicing LPO does not guarantee success.
Especially if you are a beginner, you will have to repeat a lot of failures before you get results.
Concretely analyzing these failures and making improvements will increase the success rate of LPOs.
I will introduce an example of this blog “SEO Lab” that is actually carrying out LPO.

The reason why this blog “SEO Lab” started LPO is because there were few conversions.
To put it a little more, there were almost no conversions from the landing page, and there were about 20 conversions per month via the service site.
With this, sales would not accumulate easily, so we decided to implement a thorough LPO from around May 2017.

Details of the implemented LPO

As for the content of the LPO that was carried out, we first narrowed down the target users.
Specifically, since the service provided by our company is SEO, we narrowed it down by assuming that the issue of many users related to SEO is “raising the ranking”.
In order to create a landing page that solves this problem, we kept the content that was seen and content that was likely to be related to conversion, deleted or replaced content that seemed unnecessary, and repeated analysis and improvement.
At the beginning (around May 2017), there were days when there were no conversions despite improvements, but in June 2017, the conversion rate gradually increased, and the number of conversions began to increase.

Finally (September 2017), from June 2017 An 8x increase in conversion rate.
Also, from this time on, SEO measures began to be effective in parallel, so the total number of conversions increased by more than 10 times in the end.

Summary: Improve the quality of your LPO by crafting your landing page

On the other hand, if the landing page quality is poor, the conversion rate will not increase.
To avoid such a bad situation, refine your landing page and improve the quality of your LPO.