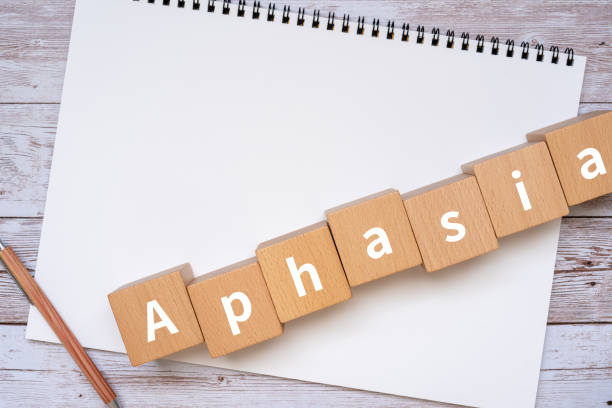 Aphasia is not simply a disease that makes it impossible to speak, but refers to cases in which language activities such as speaking, listening, reading, or writing are impaired. About 90% of the causes are sequelae of stroke such as cerebral infarction, cerebral hemorrhage, and subarachnoid hemorrhage. The types of aphasia such as Broca’s aphasia, Wernicke’s aphasia, and global aphasia, as well as treatment and prevention methods, are explained in detail.

Aphasia is a disease that impairs language activity.

Aphasia is a type of language disorder. When you hear aphasia, many people think of it as being unable to speak, but language includes different aspects of speaking, listening, reading, and writing. There are many different patterns of damage caused by one or more of them being impaired at the same time. Aphasia also includes symptoms such as being unable to repeat what the other person has said or being unable to read and understand written text. In order to understand its complex origins, it is first necessary to understand the workings of the brain that we use to manipulate language in the first place.

The motor language area was discovered in the 1860s by French psychiatrist Pierre-Paul Broca by dissecting the brains of patients with aphasia who were unable to speak. Because there is a large cerebral infarction site around the lower frontal lobe of the left cerebral cortex, thoughts cannot be expressed in words, so this part of the brain is essential to demonstrate the ability to “speak.” has been found to play a role. It is also called “Broca’s field” in honor of Broca’s achievements.

The sensory language area was discovered by German surgeon Karl Wernicke in the 1870s by observing patients with aphasia who had normal hearing but were unable to understand spoken words. It is distributed around the posterior temporal lobe of the cerebral cortex, and it has been clarified that it is essential for “language comprehension”. It is also called “Wernicke Field” in honor of Wernicke’s achievements.

The angular gyrus is located below the parietal lobe just behind the sensory-language area (= Wernicke’s area), and it was clarified by the French neurologist Desjerines that it is a part necessary for “reading and writing words.” I was.

In addition to this, since the mouth and tongue must be moved in order to speak, the “primary motor cortex” of the frontal lobe is also involved, and the “supplementary motor cortex” is also necessary to take action. In order to listen to what the other person is saying, the “auditory cortex” in the temporal lobe must work, and in order to read letters, the “visual cortex” in the occipital lobe is also necessary. In the process of thinking about various things, we also use the “prefrontal cortex” located at the front of the frontal lobe. Emotions and sensations are also stimulated. Language is exactly the work that makes the brain rotate at full speed.

Read Also: Inspired by research on aphasia: what is the “localization of function” of the cerebrum?

There are many different types of aphasia, but the three main ones are:

Motor aphasia is a type in which a person can understand words, but the words do not come out well when he or she tries to speak. It is distinguished from dysarthria, in which the movement of the mouth and tongue is impaired and the inability to pronounce words normally, and dysphonia, in which it is difficult to pronounce words due to polyps or vocal cord inflammation. The motor function of vocalization is normal, so for example, I can sing a song with only a melody without lyrics, and I can read a fixed line. However, they cannot select words and construct sentences in their own minds and speak spontaneously and well. This type of aphasia occurs when the motor language area (Broca’s area), which translates thoughts into words, is damaged.

Sensory aphasia is a type in which a person can speak on their own, but cannot understand what the other person is saying. Hearing is normal, but the words he hears cannot be recognized as words. Although my eyesight is normal, the written characters look just like patterns and I can’t understand their meaning. It occurs when the sensory language area (Wernicke’s area), which converts words into thoughts and makes sense of them, is damaged.

In addition, people with sensory aphasia speak a lot, but they tend to make a lot of mistakes, and their words tend to be incoherent. Also, they are often lacking in awareness. Normally, we can listen to what we say and proceed with the conversation while providing feedback on whether we have correctly conveyed what we are saying. However, if the sensory language area is damaged, it is thought that the person will not be able to comprehend the words they say, and will be unable to notice and correct their mistakes.

Total aphasia is a type in which both motor and sensory aphasia are present. Since the language center is located in the left cerebral hemisphere in most people, it occurs when the left cerebrum is extensively damaged. The disability is severe because all the abilities of ‘speaking’, ‘listening’, ‘reading’ and ‘writing’ are lost.

There are few cases, but there are other people who show various patterns of aphasia. How should we think about the following cases? Let’s take a look at some examples of how to think.

■I can hear sounds, but I cannot understand what people are saying. However, if you can read and understand the written characters
→ In this case, at least the written words can be understood, so Wernicke’s area will not be a problem. You can hear sounds, so your auditory cortex should be fine. However, since they cannot process what they hear as words, it is thought that some of the nerve fibers connecting the auditory cortex and Wernicke’s area are cut off.

■There is no visual abnormality, but the written characters cannot be understood as words. If you can understand what people are saying
→ In this case, there should be no problem with Wernicke’s area and visual area. However, since letters cannot be understood, it is thought that there is damage somewhere in the pathway connecting the visual cortex and the angular gyrus.

■I can translate my thoughts into words and write them down, but it is difficult to say them out loud. Cases that do not have dysarthria or voice disorders
→ In this case, Broca’s area itself has no problem, and it is equipped with the ability to produce voice. However, there is a problem with the supplementary motor area, which is involved in the initiation of speech, and it is thought that the child becomes mute.

Causes of aphasia: about 90% are aftereffects of stroke

In most cases, aphasia is acquired, and approximately 90% of cases are said to be caused by sequelae of stroke such as cerebral infarction, cerebral hemorrhage, and subarachnoid hemorrhage. Stroke damages the brain tissue in the area responsible for language, resulting in aphasia.

It can also be caused by a head injury, such as in a car accident, or by a brain tumor. Neurodegenerative diseases such as Alzheimer’s disease and Lewy body disease (including Parkinson’s disease), which cause dementia, may progress and cause aphasia due to the loss of function of the language center.

Treatment for aphasia: There is no surgery or medicine that can cure aphasia, and rehabilitation by ST is the main treatment

Aphasia is caused by damage to part of the brain, loss of nerve cells, and is difficult to reverse completely. There is currently no surgical or drug treatment.

However, the functions of the brain are not necessarily fixed, and if the remaining functions can be enhanced by external stimulation, part of the lost functions can be compensated for. It is the same as a partial recovery can be expected with early rehabilitation even if the limbs become disabled due to the aftereffects of a stroke.

Language ability is a very important element in our lives, so if you suddenly lose it, you will feel confused. Even though language rehabilitation is involved, it is difficult to do it on your own, so the cooperation of people around you, including your family, is a great help.

A Speech-Language-Hearing Therapist (ST) is a specialist who is in charge of rehabilitation for aphasia at medical institutions. In order to restore comprehensive language functions including “speaking”, “listening”, “reading” and “writing”, interviews and examinations are conducted according to the wishes of patients and their families, and training is carried out according to each symptom. . We aim to bring out the brain’s reserve capacity by repeatedly working on stimulating all the senses, rather than just training the language just because the language is impaired. In addition, even if you can’t restore it to the way it was before, they will give you various guidance and advice, such as thinking of new ways to communicate well using the remaining functions.

Is it possible to prevent aphasia? Prevention and countermeasures

If it is difficult to cure after the onset, we want to prevent it as much as possible. As mentioned above, 90% of aphasia is caused by sequelae of stroke. Therefore, it is important to be careful not to cause a stroke.

Cerebrovascular disorders such as cerebral infarction and cerebral hemorrhage are caused by hypertension, arrhythmia, diabetes, and hyperlipidemia, so if you are diagnosed with these diseases during a medical examination, you should review your lifestyle habits. . To prevent arteriosclerosis, diet (avoid excessive intake of salt, sugar, and fat), exercise (continue moderate aerobic exercise), reduce stress (do not put a strain on the heart and blood vessels, and get good quality sleep). ) are the basics. If it cannot be controlled by lifestyle alone, it is also necessary to borrow the power of medicine to prevent the condition from worsening.

PreviousInspired by research on aphasia: what is the “localization of function” of the cerebrum?
NextFunctions of the brainstem……The structure and function of the brainstem, which is essential for sustaining life