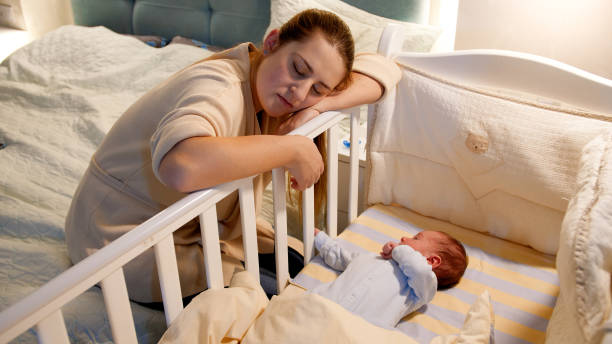 I get sleepy at night and wake up in the morning. This seemingly obvious sleep-wake rhythm is created by sleep-promoting substances and your body’s internal clock. We will explain the basics of sleep, such as the mechanism of sleep and the sleep cycle that repeats non-REM sleep and REM sleep.

Not all brain functions stop during sleep. We can sleep because the brain is working to make us sleep. So how do you fall asleep?

The two major factors that determine sleepiness are sleep-promoting substances and the biological clock .

If you continue exercising for a long time, fatigue substances will accumulate in your muscles and you will not be able to exert sufficient force. The same thing happens in the brain, and sleep-promoting substances accumulate in proportion to the time and amount of brain work. At present, prostaglandins, cytokines, and neuropeptides are known as sleep-promoting substances, but their detailed functions are still not well understood.

Even living in a pitch-black laboratory, humans sleep and wake up with a certain degree of regularity. This is because they live according to the rhythm of the biological clock built into the body . The body clock consists of the central clock in the brain and peripheral clocks throughout the body, but our central clocks have a 24-25 hour cycle.

Circadian RhythmIt’s called. Circadian means “about one day”. It is this circadian rhythm that makes us feel a little less sleepy in the morning after an all-nighter. In humans, not only sleep, but also body temperature, blood pressure, pulse, hormone secretion, and immunity are affected by circadian rhythms.

Read Also: How to get a good night’s sleep during the long autumn nights?

Non-REM sleep and REM sleep: The human sleep cycle is about one and a half hours

Brain waves during sleep have a certain rhythm. After falling asleep, the sleep gradually becomes deeper, and after a while after reaching the deepest level, it gradually becomes shallower. Most people have a sleep cycle of about 1.5 hours, which repeats about 4-5 times a night.

Sleep is divided into four stages according to depth, but it is also divided into two in terms of nature. They are non- REM sleep and REM sleep . REM sleep is an acronym for Rapid Eye Movement, a state in which the eyeballs are actively moving while asleep.

During non- REM sleep , the brain is resting because the activity of the whole brain is reduced. The pulse rate, blood pressure, and breathing rate are reduced, and the internal organs are also resting. This is the sleep when the cat sleeps well, with its chin resting on its front legs.

During non-REM sleep, growth hormones are secreted and resistance to pathogenic bacteria and viruses is strengthened. Growth hormone not only makes children grow, but also maintains damaged cells during the day, so it is also an important hormone for adults. REM sleep

, which is small at the beginning of sleep , increases as morning approaches, accounting for 20 to 30% of the sleep cycle. During REM sleep, the muscles of almost the whole body are relaxed and the body is resting. This is what happens when a cat lies on its side and sleeps.

But the brain is just as active as it is when it’s awake. When awakening during REM sleep, it is easier to remember dreams, so it is thought that this is the time to consolidate memories and simulate waking behavior.

PreviousHow to get a good night’s sleep during the long autumn nights?
NextEconomic loss due to insomnia is 3 trillion yen?