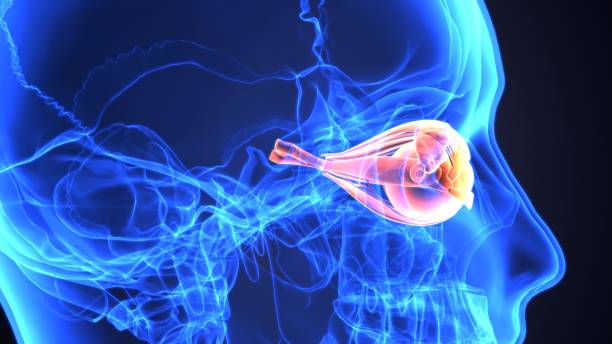 Seeing, hearing, and smelling, we use many senses to perceive changes in the external world. Above all, there is a very good mechanism to “see” with the left and right eyes. We will explain in an easy-to-understand, technical way what the optic chiasm is, and how light enters the retina of the eye and is perceived by the cerebrum.

However, the weight is slightly different depending on the animal. We humans have a weaker sense of smell than wild animals such as dogs. It cannot be said that “hearing” is superior among animals. That’s why “vision” is so important. You can understand it well from the fact that blindness is a big obstacle in life.

We have a pair of eyes, left and right. The cerebrum is also divided into left and right hemispheres. Since the right (left) half of the body and the left (right) hemisphere of the brain are connected, that is, they are crossed, we imagine that the right (left) eye is connected to the left (right) hemisphere of the brain. I think it’s a lot of people, but it’s actually not always the case. This time, let’s explain the connection between the eyes and the brain in an easy-to-understand manner.

Read Also: Is there a superiority or inferiority between the left and right brain? Problems with the “right-brain, left-brain theory”

At the back of the eye, there is a part called the retina, where there are many photoreceptor cells that sense light entering the eye and respond according to the wavelength and intensity of that light. increase. Signals generated by the photoreceptor cells are passed through several other cell types in the retina, and finally to “ganglion cells”, where they exit the eye in bundles of the optic nerve.

If you look at the cerebrum from the bottom, you will find a large X-shaped structure called the optic chiasm. It is said that there are about 1 million optic nerve fibers that come out of the retinas of the left and right eyes, and a total of nearly 2 million fibers gather here and then divide again into the left and right. By the way, optic chiasm is called optic chiasm in English. It comes from the Greek pronunciation of “x” as “chi”.

After passing through the optic chiasm, the optic nerve fibers split into left and right, forming a structure called the optic tract, which reaches a part called the lateral geniculate body. By the way, the name “geniculate body” is derived from the fact that it has a slightly bent structure. Signals carried by the optic nerve to the lateral geniculate body are passed through synaptic transmission to another nerve cell and enter the brain. Ultimately, when it reaches the “primary visual cortex” located in the occipital lobes of the left and right hemispheres of the brain, “I can see it!”

Do the optic nerves cross? “half crossover” to be exact

The series of processes in which light information captured by the eye is transmitted to the brain is generally explained only as “the crossing of the left and right at the optic chiasm.” But it’s actually a little more complicated. The figure below summarizes this in an easy-to-understand manner.

A visual pathway through which information entering both eyes is delivered to the primary visual cortex. Diagram drawn looking up from the base of the brain (original diagram created by the guide)In fact, the optic nerve is “half-chiasmatic” at the optic chiasm.

In both eyes, the optic nerves (red and green lines in the figure) from the outer (closer to the ear) retina return to the same side after reaching the optic chiasm, so the information is transferred to the ipsilateral side. transmitted to the visual cortex of the hemisphere. On the other hand, the optic nerves (blue and yellow lines in the figure) from the inner retina (closer to the nose) move to the opposite side when they pass the optic chiasm, so the information is sent to the opposite visual cortex. It is transmitted. In other words, the outer halves of the optic nerves of both eyes do not cross, but the inner halves do.

How we see things when we are visually impaired

The ‘half-cross’ connection between the eyes and the brain can be seen in the visual disturbances seen in brain-injured patients.

For example, as shown in the left figure below, if the part (A) between the left eye and the optic chiasm is damaged, the green and yellow lines extending from the left eye are cut off, so the signal from the left eye is completely lost. It will not be transmitted to the brain, and it will simply be in a state of “I can’t see at all in my left eye”. There is no change in the appearance of the right eye (red line and blue line).

The change in vision varies depending on where in the visual pathway is damaged. Note that the figure is drawn in the direction of looking up from the base of the brain, so the left and right are reversed (original figure created by the guide)On the other hand, as shown in the upper right figure, when the area near the visual cortex in the left hemisphere behind the optic chiasm (B) is damaged, the blue line and the green line conveying the letter R seen to the right are cut off. Therefore, neither eye can see the scenery on the right including R. Whichever eye you use, the view to the left including L (red line and yellow line) does not change.

There are many confirmed cases like this, so there is no doubt. Also, conversely, it is possible to predict which part of the brain has been damaged depending on how the appearance has changed as a sequela.

With the evolution of animals, from full crossing to half crossing

To conclude this article, let’s consider why the connection between the eyes and the brain is “half-crossed”. A hint is the comparison with animals.

Most animals have two eyes, but some have “full chiasmia” connections to the brain. For example, fish and birds have both eyes on the sides of their heads, and their right and left eyes see different things. You don’t see the same thing over and over again with both eyes. Instead, you can see almost 360 degrees all at once, all the way to the back of your head. All optic nerves of the right eye are connected to the left hemisphere, and all optic nerves of the left eye are connected to the right hemisphere.

Many mammals are “half-crossed” like us humans, so it seems that they changed from “fully-crossed” to “half-crossed” in the process of biological evolution. When you look at the same object with both eyes, the way you see it is slightly different because the angles at which you look at it are different. By judging the difference in the brain, it seems that the depth and three-dimensional effect can be perceived. Our ancestors may have evolved a way of thinking that emphasized “distance” rather than “visible range” in order to catch prey. In fact, many herbivores, such as cows and horses, have eyes on the sides of their faces, while carnivores, such as dogs and cats, have both eyes on the front of their faces.

Interestingly, amphibian frogs change their eye-brain connections as they grow. Tadpoles, like fish, are “total crosses”. The right and left eyes are completely independent and see different views. As it grows, the optic nerve that connects to the same side without crossing is added, and the adult frog becomes “half-chiasmatic”. It’s amazing that children and adults use the good points of “full crossover” and “half crossover” properly.

PreviousIs there a superiority or inferiority between the left and right brain? Problems with the “right-brain, left-brain theory”
NextIs the right-brain an artistic brain? Why You Shouldn’t Believe Left-Brain/Right-Brain Personality Tests