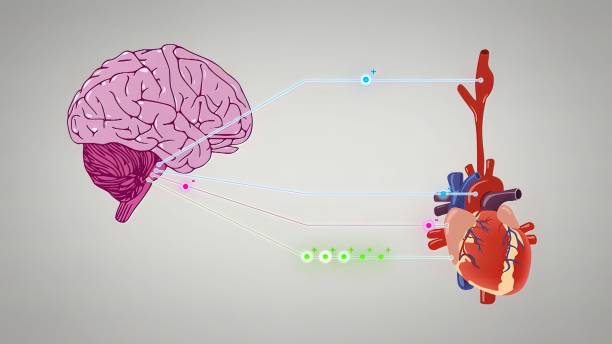 The brain stem has very important functions that control breathing and blood circulation, which are essential for sustaining life. The parts of the brainstem are divided into the medulla oblongata, pons, midbrain, thalamus, and hypothalamus. The basics of each part and function are explained in an easy-to-understand manner.

The brainstem is… the human brain, which has an upright brainstem unlike other animals

However, when compared to other animals, the human brainstem is decisively different. It means “standing”.

We chose bipedalism as we evolved from apes to humans. Bipedal locomotion is a walking style that supports the body with two legs and moves the center of gravity forward, and can be seen in some dinosaurs and birds such as ostriches. Humans are the only animals that can walk on two legs with a pedestal standing vertically. For that reason, the spinal cord in the spine and the brain stem, which is connected to the upper end of the spinal cord, must have been erected straight.

The name represents the body, the “brain stem,” which plays an essential role in sustaining life.

The shape of the entire human brain is like a large tree, with the cerebrum, which has many wrinkles and is greatly raised, on top of the brainstem. It looks like the branches and leaves are overgrown on the big thick trunk. The name “brain stem” is exactly “the name represents the body”.

The person in charge of coordinating the work and the person in charge of the drinking party is called the “secretary”, and the roads that form the skeleton road network within the country, region or city are called “trunk roads”. In other words, the kanji character for “stem” has the meaning of being the center of things, and without it, the whole thing cannot be established, which is very important. The brainstem is not just a structural support for the brain underneath, it is a vital part of the brain.

What part of the brainstem? Brainstem consisting of medulla oblongata, pons, midbrain, thalamus, and hypothalamus

The figure below shows the position of the brain stem in the entire human brain and the brain stem viewed from the front or left side. If you divide the brainstem into smaller parts, from the bottom, the parts called “medullary oblongata”, “ponse”, “midbrain”, “thalamus”, and “hypothalamus” are built up.

The brainstem is positioned to support the cerebrum from below, and consists of the medulla oblongata, pons, midbrain, thalamus, and hypothalamus (original diagram created by the guide)Of these, the thalamus and hypothalamus are collectively called the “diencephalon”, and some scholars say they are not included in the brain stem. I think so, so I’ll include it here.

The functions and roles of each part are explained below.

The medulla oblongata is the part that contains many vital centers.

The cardiovascular motor center regulates the blood circulation that delivers oxygen and nutrients throughout the body by regulating the heartbeat and vasoconstriction. For example, when blood pressure drops suddenly, the heart begins to beat faster. This is because there is a mechanism that tries to restore the flow of

The vomiting center automatically initiates the movement to vomit. If you eat too much or accidentally eat a foreign object or poison, it is not good for your body if you do not eat it. Exercise. When we exhale, we don’t think about how to move our muscles. The vomiting center in the medulla oblongata commands the vomiting muscles to move in a pre-programmed manner that occurs unconsciously as a momentary movement.

The pons is located above the medulla oblongata and in contact with the cerebellum. Just to be sure, the reading is not “hashi” but “kyo”. It is said that this part was named after the “bridge” that spans the left and right cerebellar hemispheres, because it looks like a bulging bundle of fibers extending from the cerebellum that wraps around the brainstem. It is an important relay point and passageway for the sensory system that is transmitted from the bottom to the top and the motor system that is transmitted from the top to the bottom. It also plays the role of a “respiratory control center” that oversees the function of the respiratory center in the medulla oblongata introduced above and consciously changes the rhythm of breathing.

Above the bridge is the midbrain. It regulates body movements and serves as a relay point for vision and hearing. Inside, there is a region named “substantia nigra” because it looks black because it contains a lot of melanin, and nerve cells responsible for the regulatory function for smooth movement of the body are distributed. In a brain disease called Parkinson’s disease, the nerve cells in the substantia nigra die for unknown reasons, causing tremors in the hands and feet, and the body becomes rigid and unable to move well.

The diencephalon, which consists of the thalamus and hypothalamus, is a relay of nerves and the control of instinctive desires.

Located at the top of the brainstem, the diencephalon consists of the thalamus and hypothalamus.

The thalamus is located near the center of the brain and relays information from various nerves. In particular, it plays a role in transmitting visual and auditory information to the cerebral neocortex.

And the hypothalamus, as the name suggests, is the area at the bottom of the thalamus. There is a center that controls instinctive desires such as appetite, drinking water, temperature regulation, sleep, and sexual desire, and it plays an indispensable role for us to live.

In summary, the brainstem silently performs the task of controlling the basic functions that sustain life, such as breathing, blood circulation, movement, appetite, and sleep.

Also, other parts of the brain shut down during sleep to relieve fatigue, but the brainstem never rests. Even during sleep, I can breathe properly, and my body temperature is kept almost constant whether it’s hot or cold. It is proof that the brainstem continues to work 24/7.

Because of its primitive, unconscious function, we are usually unaware of it, but it is this faithful, unsung powerhouse of the brainstem that keeps us alive.