Does eating bread make you fat? or “bread is bad for you”? 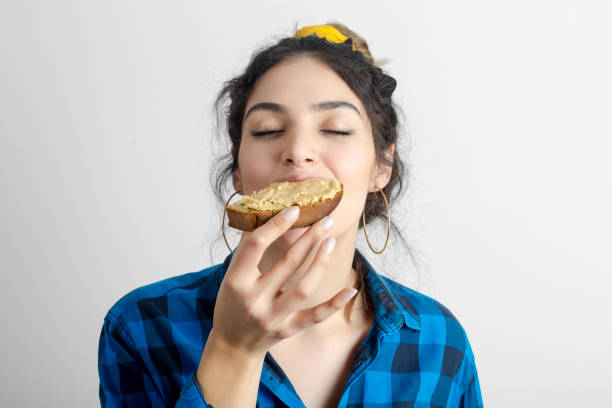 “Bread makes you fatter than rice.” I think this is because bread tends to be higher in calories than rice.

Rice can be made just by cooking rice, so the only raw material is rice. Bread, on the other hand, is generally made by adding yeast, salt, sugar (as food for yeast), butter, eggs, fresh cream, etc., in addition to wheat flour. There is a feature that it tends to be high in calories. Even bagels and French bread, which are the simplest ingredients, require flour, salt, and yeast. Bread without added salt can be made physically, but unfortunately it does not taste very good.

“Bread is bad for you” is a lie? Are there diseases caused by eating bread?

Is bread worse for your health than rice? From the conclusion, bread eating does not basically have any adverse effects on health. If bread had a bad effect on health, people in Europe and America, who mainly eat bread, would not be able to live well.

If there is a serious impact, I think it is when you are allergic to bread ingredients such as wheat containing gluten, and when you eat too much because the bread is light.

Hospital food provided to hospitalized patients pays more attention to the effects on the body than the normal menu, but of course bread is also provided in hospital food. Not only is there no health problem, but there is also the merit of eating bread that is unique to hospital food. First of all, you can avoid getting tired of eating only rice. Secondly, if you buy food in a bag, you can put it on a plate and serve it as it is, so it is very hygienic, saves the work of the cook, and allows you to increase the number of other dishes. It does not use fire, so it is really useful in summer. And finally, because the patient can “hold it in their hands” to eat, even those who have difficulty moving their bodies can easily feel the joy of eating on their own. If you put a side dish between bread, you can theoretically finish it by yourself.

Even in hospitals that care about health management, bread is commonly provided like this. If I were forced to point out the disadvantages of eating bread, as I mentioned earlier, bread without salt is not delicious, so the amount of salt intake would inevitably increase. When eating bread, there are also requests to dip it in the soup and eat it, so if soup is served together, the salt intake will increase further. If you eat bread for breakfast, you will have to adjust the amount of salt used for lunch and dinner.

Even so, there are strong requests from patients that they want to eat bread. I think there are many facilities that provide at least once every two days. It is a food that you can eat without worrying about the effects on your health.

If you don’t want to spoil your health with a bread diet, what you need to be careful about is what is commonly called “sweet bread”. Sweet buns such as red bean buns, chocolate buns, and melon buns should be counted as sweets and should not be eaten as a meal.

On the other hand, plain bread, bread rolls, muffins, focaccia, etc., which are called “meal bread”, and those mixed with vegetables, eggs, meat, fish, etc. (wrapped) can be eaten as a meal. no problem.

There is an anecdote that says, “When you’re on a diet, it’s easier to lose weight because rice contains more water than bread.” As a result of this anecdote being distorted like a message game, it is speculated that it has led to bad rumors such as “bread is bad for your health” and “bread makes you fat”.

However, the theory that “rice makes it easier to lose weight than bread” is just that “rice has a high water content”, so it is easy to feel full even with a small amount of food. When you have a choice, it’s good to choose rice.

If you want to eat bread, remember to stay hydrated with drinks. Also, since there is a high possibility that they do not feel full, I think it would be a good idea for them to enjoy eating bread skillfully while doing things such as using vegetables to make them feel full. However, bread has a higher salt content than rice, so be careful not to eat too much.

Read Also: Fibrous Papule Of The Nose And Face