Home >> Health >> Why is it possible to survive cardiopulmonary arrest? Brainstem function and resuscitation

Why is it possible to survive cardiopulmonary arrest? Brainstem function and resuscitation 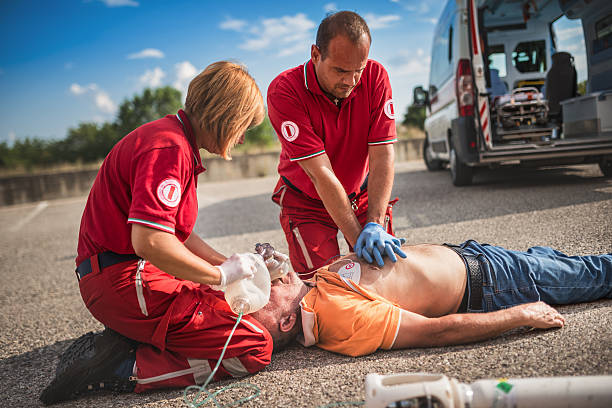 The difference between “cardiopulmonary arrest” and “death”: the reason why death does not occur even if the heart and breathing stop

As you all know well, the heart plays the role of a pump that circulates blood throughout the body, and the lungs play the role of taking in oxygen in the body. When these fail to function, life support becomes difficult, but that alone does not mean death. The center that sustains our lives is located in a place called the medulla oblongata in the brain, so even if you appear to be in cardiopulmonary arrest, as long as your brain is still alive, you are not dead. is.

When a person judged to be in a state of cardiopulmonary arrest recovers through subsequent treatment, it is sometimes expressed as “recovered from cardiopulmonary arrest”, but in that case it is simply “because the brain was alive, He hadn’t died yet.” Death occurs when the heart and lungs fail and eventually the medulla oblongata in the brain becomes irreversibly damaged.

Keeping in mind the role of the brain in sustaining life, let’s explain in an easy-to-understand manner so that the relationship between “cardiopulmonary arrest” and “death” can be understood correctly.

At the scene of an emergency, the first thing to do is to check for consciousness, breathing, and the presence or absence of a pulse. When a pulse cannot be obtained, it is judged as “cardiac arrest”, but when it becomes “no pulse” due to blood loss due to an accident etc., the heart actually does not stop, rather it is called “ventricular arrest”. They often have a condition in which the heart is beating abnormally fast, called ventricular fibrillation (VF).

When there is a lot of blood loss, the blood flow that delivers oxygen and nutrients to the body is reduced, so the whole body becomes oxygen starved. Our bodies are equipped with a “reflex” mechanism that, when faced with such a pinch, speeds up the heartbeat and tries to make the blood circulate even a little. And it is the “cardiovascular motor center ” located in the medulla oblongata in the brain that is responsible for this mechanism . please give me). This brain command causes the heart to beat faster and faster. When the heart itself is deprived of oxygen, it becomes overexcited and causes arrhythmias. A heart rate exceeding 350/min is commonly referred to as “fibrillation.” It’s so fast that it’s just jerking and jerking, and it’s not functioning as a pump. It is correct to understand that “the heart is beating” instead of “stopping”.

What is an AED? “Automated external defibrillator” that restores a normal rhythm to a beating heart

When ventricular fibrillation occurs, the person is usually unconscious. At the same time as calling an ambulance immediately, cardiopulmonary resuscitation with cardiac massage and artificial respiration, and an AED are used. An AED is an abbreviation for Automated External Defibrillator, and is a medical device that delivers an electric shock from outside the body to the heart that has ventricular fibrillation to return it to a normal rhythm. . It can be used by non-medical workers as the device automatically analyzes the electrocardiogram and gives voice instructions.

Some of you may misunderstand AED as “a device that revives a stopped heart with an electric shock”, but it is quite the opposite. Because it is a “defibrillator”, it removes the twitching of the convulsive heart and cures it. To break it down a little more, the correct answer is “a device that calms the raging heart by putting it in a bowl”.

Although the word “cardiopulmonary arrest” is used, in fact, “lung stops” is a strange expression medically. This is because the lungs originally do not move on their own, and in that sense are stationary organs.

A lung is just a bag that can hold air, just like a balloon. Just as a balloon does not inflate and deflate on its own, lungs do not move on their own. So why do our lungs expand and contract when we breathe? what drives it? Yes, we make our lungs grow and shrink by exercising different muscles in our rib cage, such as the diaphragm, intercostal muscles, neck and shoulder muscles. And that directive is given from the brain. Specifically, the “respiratory center” in the medulla oblongata of the brain continuously issues commands to “move the muscles of the ribcage”, thereby establishing “breathing movement”.

When there is massive blood loss, the blood flow that used to deliver oxygen and nutrients to the brain is reduced, and when the brain is damaged, it is no longer able to issue commands to initiate respiratory movements, and spontaneous breathing stops. However, if the respiratory center of the medulla oblongata has temporarily stopped working, in other words, if irreversible damage has not yet occurred, it is recommended to force air into and out of the lungs using an artificial respiration device. If the blood circulation recovers in the meantime, the function of the respiratory center may return.

Whether “cardiopulmonary arrest” leads to “death” is a race against time. It is said that irreversible brain damage occurs in about 5 minutes after a heart spasm occurs and blood circulation stops. Failure to provide oxygen to the brain for longer than this could result in death or serious sequelae.

It goes without saying that immediate action is needed to save lives.