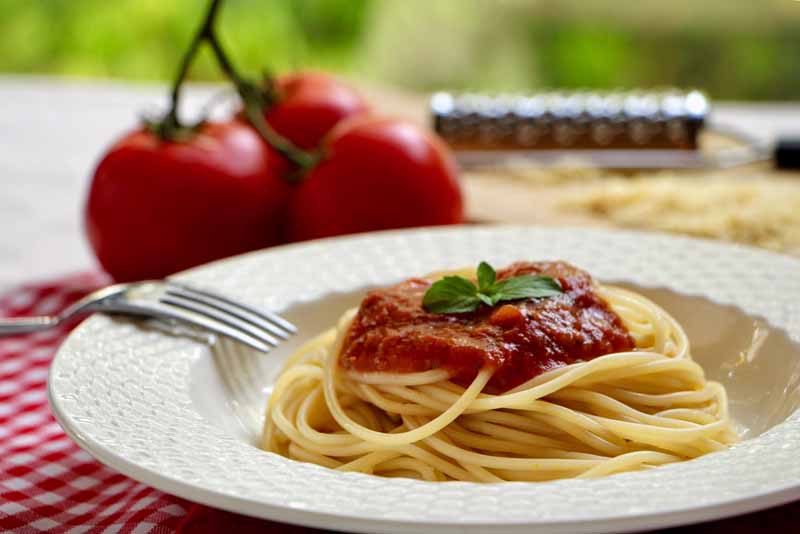 There’s always a big confusion that whether we should leave simmer spaghetti sauce covered or uncovered while cooking? To encounter this problem, I have found out many opinions by meeting personally to different people and through surfing on internet as well.

In case if you want to know, which way works best for whether we should leave simmer spaghetti sauce covered or uncovered while cooking?

Here is described in detail what I have found.

Spaghetti sauce that is going thickened should be simmered uncovered. You can cover a sauce with lid until it starts to boil. Then, reduce heat from spaghetti and bring sauce to a simmer pot. Done sauce uncovered until desired level of consistency.

Cooking spaghetti sauce usually only requires high temperature which is the very basic and easiest way to cook.

Cooking spaghetti sauce can be a fun experiment when you want to try something different, or if you have capability to change the taste of a sauce.

Do Sauces get thickened with Lid on or off?

What effects are created on sauce when they are covered with lid and how does simmer spaghetti sauce covered or uncovered straightens the path for it. What will happen when the sauce which you are going to use is more watery then the level of taste which you probably like?

You will be in need to thicken the sauce by reducing the amount of liquid present in sauce when it is simmered.

Thickening the sauce is called reducing which is actually the process of getting amount of water low.

The most common method to reduce the size of water from spaghetti sauce is to heat first then boil away the extra water from it.

Sauces will get thicken more effectively when the lid of pan is off. Having lid on the pan will trap the evaporated water and it will leave sauce watery.

Evaporated water collects onto the lid and then drips back slowly into the sauce.

Even, if you keep on to stir sauce continuously only when you lift the lid will moisture escape then it won’t effect that much.

Sauces normally get thickened much faster when the lid is off from the pan in which you are cooking the sauce.

In try to reduce the water from the sauce with the lid could lead to so many other problems.

When the water starts rising from the sauce, It will begin to separate from the sauce, leaving behind a thickened sauce on the bottom of the pan, which could start to burn if it is not stirred properly.

Simmering process requires less time and energy than boiling the sauce. Simmering is an effective way to slowly reduce the liquid and then bring out the flavour from sauce.

When you are simmering the sauce basically, you want to avoid sauce from too much heat.

Leaving the lid on, on the pan will also trap much of the heat, causing the simmer to turn to a harder boil and leaving the thicken sauce.

This is another yet important reason to leave your lid off while simmering the spaghetti sauce.

How Long period of time Should I Simmer spaghetti Sauce?

In case, if you have market bought spaghetti sauce then, you shouldn’t have to simmer it at all. Just bring it up to heat and start boiling.

There are variations in time on how long you should simmer spaghetti sauce.

Actually, it entirely depends upon, what you think is good or enough time for simmering, but here is the common range of cooking time for spaghetti sauce.

Slow simmering of your spaghetti sauce ranges from approximately 1 hour up to 6 hours of simmer.

You can add more water to the spaghetti sauce when you simmer it to let the tomatoes cook longer but not to burn. So, taste of sauce doesn’t destroyed when eating with food.

If you are haven’t sure then, you can always move on by checking the taste of sauce.

Check your sauce when you cook it to see whether it is done or it need more time to get done.

Apart from simmering, to have a fresh tomato taste in sauce cook with high heat for a shorter span of time.

The longer period of time, you will cook the sauce the more sweet it will turn out in taste.

If you have a meat sauce with you, you should simmer it for longer period of time normally between 2 to 4 hours.

I would recommend for simmering your spaghetti sauce normally for 2 – 3 hours for better taste and freshness.

Does Sauce get Thicken on High or Low Heat?

What effects does heat lasts on sauce and while heating should I let simmer spaghetti sauce covered or uncovered? Sauce will get thicken with the fastest speed when it is cooked on high heat.

Both heats including low and high can be used to reduce the amount of water from sauce.

Here are some things to consider while cooking:

When you switch off the heat, the pan remains warm and can continue to thicken a sauce for some little period of time. Pull off your pan quickly or turn your heat off earlier and let it adjust for cooling for some time.

High heat takes usually less time but, that is also easiest way to mess up the sauce with taste and flavour.

If you will not be careful while cooking the sauce then it can become scorched so quickly and it will have a burnt taste also which would be incapable to eat with food.

How can you Stop Tomato Sauce from Splattering?

To avoid sauce from splattering what role does it this play: simmer spaghetti sauce covered or uncovered?

One of the biggest fears while cooking the spaghetti sauce is the splattering of when it starts boiling because of the very bad mess and stains.

Also, the cleaning stains is not fun so, let’s be careful and avoid such kind of messes.

You can actually stop spaghetti sauce from splattering off while cooking.

The best way out of all is to simmer the spaghetti sauce, not only simmering is the best way to thicken the sauce but also easiest way to cook sauce.

Simmering will prevent major of splattering blenders because it’s a very gentle way of boiling food.

Second important reason to cover the spaghetti sauce in the beginning until it begins to boil, then minimise the heat and wait until it starts simmering in the better way.

If you are still worried about splattering then the reason is, maybe you don’t trust yourself or someone else cooking the spaghetti sauce in front of you in so refined way. You can use a splatter screen on top of the pan to observe all the process.

Splatter guards are basically a metal mesh covers that you place on top of pans for better results. They screen out the splatters from top layer, while allowing heat and steam to escape from the sauce.

Splatter screens comes in variety of different sizes in markets, most of them are always supposed to be round in shape.

Put the spatter screen on top of your pan during the cooking for best observations. I would still recommend you to avoid bringing any spaghetti sauce to a level of high heat.

Another great way to reduce liquid from spaghetti sauce quickly without causing a huge mess in kitchen while making food is to use a wide and deep pan while taking start. A wide pan allows for all the liquids to evaporate on much faster speed. The high walls of pan should stop most of the splattering from escaping from the spaghetti sauce while cooking.

Can You Overcook spaghetti Sauce?

When the liquid is gone from the sauce it will start sticking to the pan. In that way, it can easily burn out and taste can be destroyed.

Apart from, burning the sauce by overcooking you might not like a sauce that has been cooked for several hours because its taste has been changed.

Tomato flavour does come after having a fine balance between acidity and bitterness.

Sometimes, the sauce favor turns towards bitterness when cooking for too long periods of time.

PreviousHow to Clean Potatoes without Brush?
NextCan you eat flour tortillas without cooking them?