Home >> Food >> Can you make Kraft mac and cheese without butter?

Can you make Kraft mac and cheese without butter? 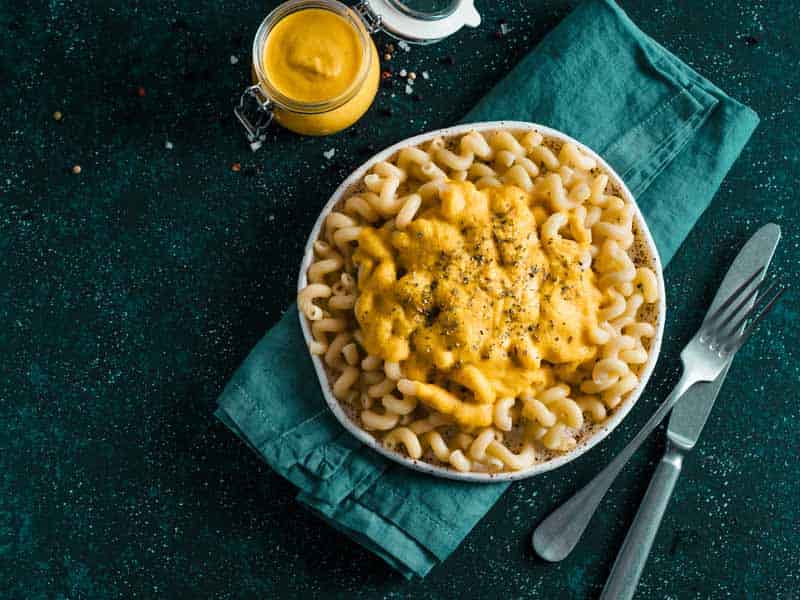 Mac and cheese are everyone’s favourite. You definitely needs some ingredients to make them. It is famous that: you need butter to make mac and cheese but what about if you don’t have butter at the time of cooking. There rounds a question in your mind can you make Kraft mac and cheese without butter?

So, I was wondering if excluding the butter from the recipe ingredients would ruin the mac and cheese taste or not?

Maybe there is a substitute or it could be to use in place of the butter?

Can you make Kraft mac and cheese without butter? YES, Boxed mac and cheese can still be made without adding butter or margarine in its recipe. As the butter is used only to add an additional flavour in the food. Macaroni and cheese requires dairy or non-dairy milk but butter is just an optional ingredient.

You will be curious to know about substitutes for mac and cheese instead of butter which you can use while making food.  Along with the question why butter should be used when making homemade mac and cheese?

Does Mac and Cheese Need Butter?

The answer of your most curious question can you make Kraft mac and cheese without butter? Is better explained here:

Butter is not included in packaged mac and cheese because of its short life spam.

Although it does add a difference in taste but you can still have a creamy and delicious macaroni and cheese without adding butter.

You might run out of butter or you are looking to make a slightly healthier macaroni and cheese.

Excluding the butter can lower the calories by decreasing the amount of fats.

Either way butter is not an especial requirement. Unlike, baking foods for which you need exact ingredients.

The only cooking process involved in mac and cheese making is boiling the noodles.

Since butter is added when both are done. It does have little effect on the actual cooking. The rest is just mixing the ingredients well together.

Does packaged or boxed macaroni and cheese need butter?

There are some brands list butter as an optional ingredient for having best butter taste.

The cooking procedure told are very similar to other brands of macaroni and cheese. As opposite to Kraft Annie’s who gives an additional option for unsalted butter.

Listed as a suggestions for a richer flavour.

Other than that cooking directions are nearly same.

Both these brands of mac and cheeses suggests adding butter for a richer flavour in food. Not saying that Annie’s is better than Kraft, both of them probably taste better with butter or margarine in my opinion. You can choose which is most suitable to your taste. So, besides adding flavour butter also does serve other purposes. These become more important when making mac and cheese at home.

Does Mac and Cheese Taste Bad Without Butter?

As a general rule, fats such as butter help to give more flavour to a food. Mac and cheese does include a small amount of fat from the milk already but adding extra butter adds an even richer taste.

The butter has no use in the cooking process it just adds another layer of flavour in food before serving.

Mac and cheese will not taste bad without butter but it taste better with butter. Most brands of packaged mac and cheese gives you an option of adding extra butter/margarine.

Otherwise, you shouldn’t include milk in these two. I think, it’s just a recommendation because it does also enhance the flavour but it isn’t absolutely necessary ingredient.

Why Butter Is Used?

As stated earlier, butter is only used in boxed mac and cheese mainly for flavour. The creaminess of the cheese comes from the added extra milk for which whole milk is usually recommended.

Although, butter will thicken the cheese somehow because of the milk fats present in the butter.

Skipping the butter will lead to a slightly thinner macaroni and cheese food.

Because butter is actually fat, it blends well with flour to make a base for sauces. This is called as roux which is a paste that can be used to thicken sauces.

The roux is used for the cheese in the case of homemade mac and cheese.

Roux is prepared by melting butter first then adding it in flour and keep on stirring together. Cheese is then added to roux.  Butter also prevents the mac and cheese from being too dry. Since, the butter is oily in nature. It will help to retain moisture in food.

Substitutes for Butter in Mac and Cheese:

Here the confusions regarding can you make Kraft mac and cheese without butter? Are better rectified over here along with examples:

When you want to use an alternative of butter in cheese and butter then there are variety of substitutes that can be used.

The most common one is margarine which is usually mentioned in the instructions above the box of cheese and mac.

Margin is so close to butter because they both are enriched with fats. They look and have similar texture.

Margarine is basically made up of vegetable oils and water instead of dairy ingredients. Both margin and butter are used as spreads in the dairy products. But they both can be used similarly in cooking and baking.

Margarine is considered to be the one of the best substitutes for butter when it comes to macaroni and cheese.

Really it’s a great substitute for butter because of the similarities they share with each other. Margarine is given a butter flavour and is also packaged and sold the same way.

Substitutes that you are intended to use in mac and cheese should be high in fat. You could use olive oil but it will be slightly too oily and will not help with the flavour much.

You can use a plain yogurt of a low‐fat version as well. Yogurt will make the cheese more creamy and the flavour slightly tangy.

As same of using yogurt, sour cream can also be a better butter substitute. When you are using either yogurt or sour cream you could skip the milk and butter all together.

Any type of dairy product can be used as alternative like vegan or plant‐based milks will work as well in cheese and macaroni. Margarine is considered to be the best alternative for butter. If you don’t have margarine available then you could use a slightly more common condiment.

Can I use Mayo Instead of Butter in Mac and Cheese?

Yes, mayonnaise can be used as an alternative of butter in macaroni and cheese. Mayo is doable and you can find some ingredients for it online as well.

If you likes a very creamy macaroni and cheese then takes notes that one recipe the mayonnaise actually levels out cheese flavour. In this way, you don’t get overwhelmed by the amount of cheese you use because that’s just up to you.

Similar to yogurt, mayo is not typically thought to be used in macaroni and cheese because both of them have a tangy and almost sour flavour in taste.

You may know that these ingredients are better suited for a packed macaroni and cheese rather than a stove top quick mix version of mac and cheese.

Butter Substitute Measurements to be used in mac and cheese:

Here the solutions are provided along with exact measurement about your major problem can you make Kraft mac and cheese without butter?

Have a look at this and enjoy a delicious mac and cheese without butter at home. A butter substitute will take a slightly different measurement. It could be confusing for newbie on how much to be used as a replacement.

A normal box of mac and cheese has about 3 cups or 8 oz. of dry noodles.

Most instructions calls for about 4 tablespoons of butter.

If you are going to use mayo, sour cream or yogurt as substitute of butter. Instead of 4 tablespoons use one cup of substitute that you have selected for your recipe.

Have a look below here is a basic recipe given for baked macaroni and cheese using mayo, sour cream or yogurt.

Here is a basic baked macaroni and cheese recipe given for without butter food:

After getting done, serve and enjoy the homemade mac and cheese

PreviousCan you overcook corned Beef?
NextWhat Causes Watery Lasagna and How To Fix It!