Home >> Food >> Can You Eat All Parts Of The Asparagus?

Can You Eat All Parts Of The Asparagus? 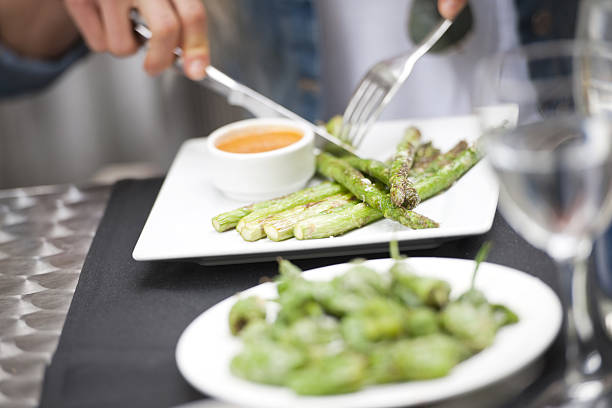 You sometimes wonder, can you eat all parts of asparagus? Asparagus is a favourite part of many dishes. However, despite the high nutritional value of these vegetables, it can be not very clear to know which parts to eat. Certain parts of asparagus can cause digestive problems when eaten, so it is important to understand which parts are edible and which are not.

The parts of asparagus you eat include the unripe tender shoots or tips, the spears, and the fleshy stems. These parts are often eaten raw in salads, boiled, grilled or baked. The best time to harvest these parts is when the plant is at least two years old and about 6 to 10 inches (15.24 to 25.4 cm).

Read on for details on the parts of asparagus you should eat, ways to prepare the vegetable, and guidelines to follow to preserve its heat-sensitive nutrients that can be lost through overcooking.

What parts of Asparagus Do you Eat?

The entire stalk of asparagus is not edible, so it’s important to know which parts of the vegetable it is to maximize its flavour.
Let’s take a look at the edible parts of asparagus:

What is the edible part of Asparagus?

If you’re not aware of how much asparagus you can eat, chances are you’ll throw away some edible parts. That’s why I think it’s important to know how much of the stem of this plant can contribute to your dietary needs.
The size of an edible asparagus stalk is about six inches (or about 15 centimetres). This includes its fleshy stems, young spears and tender shoots. In most recipes, the lower ends and roots are then disposed of.
However, you can also use the lower part of the stalk in other ways, such as juicing or composting.

Now that you know which parts of asparagus are edible, let’s break down the parts that aren’t:

Read Also: How is Soaking Rice for too long?

Do You Eat the Top of the Asparagus?

Ideally, you should cut about 3 inches (7.6 centimetres) of the asparagus from the base up. This should provide enough tasty stem to enjoy in your recipe.
Before cooking, remove the bottom end of the vegetable to prevent it from becoming bitter. What remains is a sweet, fleshy stalk that is a pleasure to eat as it cooks.

Why don’t you eat the bottom of asparagus?

There’s a good reason you don’t want to eat the end of an asparagus stalk. The bottom itself is not just a skin that covers and protects the delicacy of your food.
You don’t eat the lower end of asparagus because it is hard, bitter and stringy, making it unpleasant to eat. The bitterness is caused by chemicals that accumulate in the lower part of the stem.
Therefore, it is recommended to discard this part before cooking.

Can you Eat the ends of asparagus?

Asparagus ends can be tough and woody, so it’s a good idea to cut them off before eating or cooking the vegetable.
To remove the ends of asparagus, grasp the woody end of the vegetable with your thumb and forefinger. Bend it until it clicks, then discard this end. The other ends are trimmed by cutting off any leaves that come from the edible part at the tip of the stem using a chef’s knife or salad shears.
Leaving about an inch on each side leaves chunks to toss into soup or salads. From there, remove any tough fibres with a vegetable peeler before layering them onto the skewers into your favourite dish!

Do you have to peel asparagus?

You can peel asparagus if you want to get rid of the stringy outer layer. Peeling is unnecessary, however, as the fibre improves digestion and gives these vegetables a nice crunchy texture.
You can peel asparagus by hand or with a peeler. Using the first approach can be daunting, especially if you decide to include these vegetables in your regular diet. To avoid the hassle that comes with it, I recommend this peeler from Amazon.

Can You Eat the entire Asparagus? Can we Cook it?

There are many ways to cook asparagus, and they all have the same result; delicious, tender green spears.
Some of these methods include:

How to prepare asparagus?

Can you eat all parts of asparagus? You can easily eat the asparagus if you prepare it right. Here’s how to prepare asparagus step by step:

Read Also: Do you need to heat pasta sauce before eating?

How do you know you’ve overcooked asparagus?

If you are still wondering, can you eat all parts of asparagus? For some, asparagus is a delicacy. However, others may enjoy it only for its nutritional value and taste. Regardless of which category you fall into, there are guidelines to follow when preparing these vegetables.
First, it’s important to know that about six inches of asparagus are edible. These parts include the fleshy stems, spears and any attached leaves.
Do not eat the lower wooden part – it tends to be more fibrous than the other parts. Before preparing this vegetable, you should cut off about three inches of the bottom end.