Home >> Food >> Are Almonds Bad For Your Stomach?

Are Almonds Bad For Your Stomach? 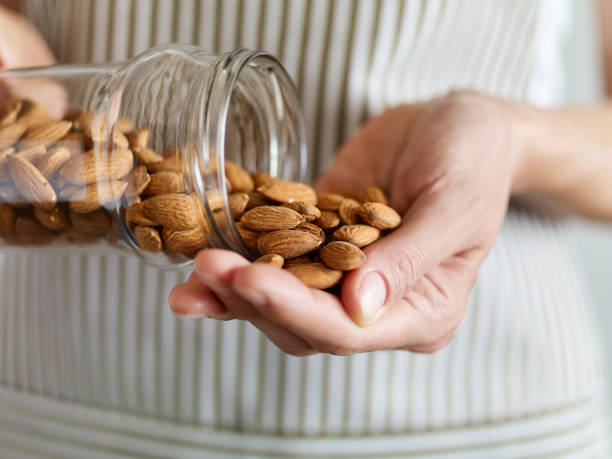 According to the (US Department of Agriculture) USDA, almonds are a rich source of protein, vitamin E, fiber, and many other nutrients. However, some regret their choice shortly after when they experience mild to severe stomach pain which is also the question of the day are almonds bad for your stomach?
As it turns out, eating large amounts of almonds, especially raw almonds, can cause stomach pain for several reasons. Although the reaction is usually temporary and harmless, stomach cramps from almonds can occasionally be a sign of a dangerous food allergy or even an almond intolerance.

Can a bad stomach be a result of an allergic reaction?

The U.S. NLM states that tree nuts, such as almonds, are one of the problem foods most likely to cause allergic reactions. Even a mild almond allergy can cause gastrointestinal symptoms such as abdominal cramps and pain, nausea, diarrhea, and vomiting. If you have persistent stomach pain after eating almonds. It may be a good idea to consult your physician to rule out the possibility of an almond allergy.
There is no cure for almond allergy. So you will need to create an elimination diet with your physician to prevent symptoms from recurring. No matter how much you love almonds, you may need to stop eating these nuts. If you experience stomach pain every time you eat them.

Read Also: Can You Eat All Parts Of The Asparagus?

If you experience severe symptoms — such as severe dizziness or difficulty breathing — after eating almonds. Contact your doctor immediately, as these are signs of a life-threatening allergic reaction called anaphylaxis. This can also lead to death if you leave it untreated.

Can a bad stomach be caused by raw almonds?

Many people like to eat almonds in their natural state. However, according to a 2009 report in Food Biophysics, the hard texture of raw almonds can make it difficult for the stomach to break down during digestion.

Results of a randomized controlled trial published in 2018 in the European Journal of Nutrition found that, contrary to popular belief, softening almonds by soaking before consumption does not improve gastrointestinal tolerance.

Read Also: what should be the lasagna internal temp?

Is a bad stomach result of almonds or food poisoning?

In 2004, millions of packages of raw almonds were recalled in response to salmonella contamination. Leading the Food and Drug Administration to require that all almonds be pasteurized before sale.

However, you can still buy raw almonds from farmers’ markets and vendors outside the US. And there’s a small chance that those nuts could contain cramp-inducing salmonella or other bacteria.

Are bad Stomach cramps due to fiber intake?

The average American eats only about sixteen grams of the recommended twenty to thirty-five grams of fiber per day. One ounce of almonds contains three point six grams of fiber. If you eat a lot of almonds and your system isn’t used to processing that much fiber, you may experience cramping, bloating, and gas for a few days.

Eating more than seventy grams of fiber per day, regardless of the source, can cause cramping, diarrhea, and other symptoms of gastrointestinal distress. If you eat a lot of almonds at once, their high fiber content can put you over your daily limit and cause temporary cramps. In most cases, this pain caused by the fibers will subside within a few hours. If the situation persists, contact your physician.

Are Almonds bad for your stomach and do they cause cyanide poisoning?

Mention that your stomach hurts after eating almonds, and maybe someone who isn’t very helpful informs you that you’re suffering from cyanide poisoning. This is not the case.

Do almond cause bad stomachs?

Rather, it is a result of the digestive system not being able to fully digest the tonsils. The undigested portion of the tonsil enters the large intestine. Where it interacts with various bacteria, leading to gas, diarrhea, and abdominal pain.
Almond intolerance is not life-threatening, but it is unpleasant. If you are intolerant to almonds, you may need to avoid not only eating almonds but also foods that contain almonds. Such as almond milk, candy bars, some cereals, and mixed nuts.

Read Also: How many calories does pan frying add?

What are some other considerations?

Bad stomach ache after eating anything also including almonds can potentially sound like a more severe condition, (such as gallstones, ulcers, or irritable bowel syndrome.) If you develop severe cramps along with fever, chills, or blood in your stool, call your doctor right away.

PreviousCan You Eat All Parts Of The Asparagus?